Using the outdoors as a source of creativity and inspiration 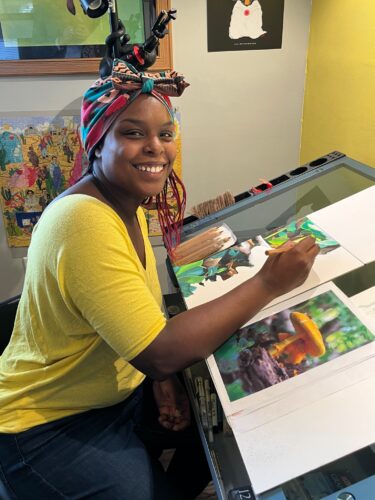 Cydnie King has trained her son, 2, to bring her leaves.

“Sometimes, we press them so I can draw them later on,” said the Fairborn-based artist and curatorial assistant at The Contemporary Dayton.

It’s an appropriate task for her “little outdoorsman:” King began incorporating nature into her art during a college assignment in which students had to find a natural object, study it for a week, and draw it again and again … and again.

“I picked a leaf and as I watched it decay and shrivel and crumble, I noticed how its veins looked like our own,” said King, who primarily works in watercolor, inks and soft pastel. “I started drawing natural objects attached to people to show how humanity is connected to nature and how nature is always present.”

While her art has evolved through the years, one thing has remained consistent: King focuses on her interpretations of the human connection to nature.

“I show botanicals as part of the human body to emphasize that parts of humanity are very similar to parts of the natural world,” she said, “and that the bond between the two is still present — no matter how much humanity tries to sometimes distance itself.”

In the past few years, King’s work has considered humans’ connection to nature in a less literal way.

“I always liked to look at circuits and see them as a stand-in for technology, which is very human thing,” she said. “About three years ago, I started playing with sketches of circuits and natural objects. I thought they looked so striking and really enjoyed how circuits blend with leaves, roots and flowers. I enjoy playing with that [human-nature] connection in a new way.”

The University of Dayton also liked this new work and purchased one of King’s illustrations in which an Agapanthus flower is coupled with circuitry images. It’s a sale that makes King proud of her work and its impact on viewers.

Indeed, King enjoys helping others see nature in a new way: “I like to draw botanicals in different states than what people are used to seeing,” she said. “I draw leaves as they’re dying, the backs of flowers, or flowers when they’re dying or about to bloom. Instead of drawing them when they’re in their full potential, I like to draw what we see right before or right after to make people see them a little differently.”

King’s love of nature is long-standing, just like her love of art. “Basically, I’ve been an artist all my life; both my parents are artists and my sister is, too,” said King, who studied art in college. “We’ve always been creative, and my sister and I are both practicing professional artists.”

King’s family also fostered her love of nature while she was growing up in St. Louis, Missouri. “My parents were avid gardeners,” King said. “They always loved flowers and had an affinity for taking care of plants. They tried to instill that in us, too. I try now with my own garden. I have a small raised bed and grow jalapenos, carrots, lots of basil and arugula.”

Whether in her garden, back yard or other greenspace, King always looks to nature for inspiration and things that striker her.

“Nature inspires me to want to learn more about the plants around us, what they’re used for, how I can draw them,” she said. “Lately it’s been mushrooms. I used to think they’re gross, but now I want to study them more. For me, mushrooms also serve as a connection between nature and technology. Humans use technology to make plants do other things, like with genetic modification. But what is it doing to the plant? In my drawings, pairing circuits with mushrooms changes what fungi do but at the same time, we’re forced to look at it and ask, ‘What are these circuits doing to the plant?’” 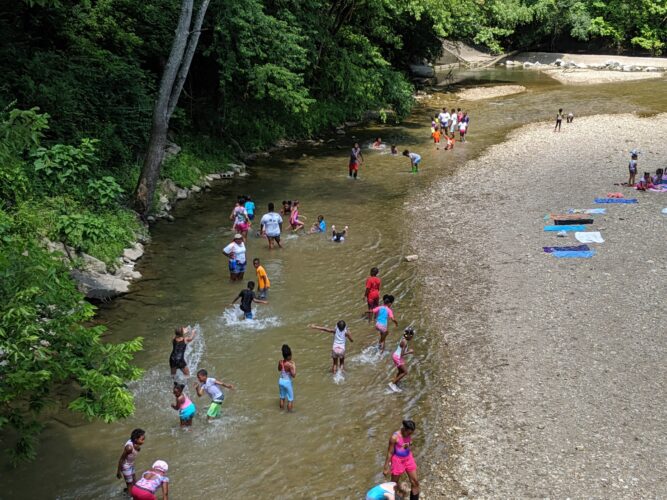 Artists aren’t the only ones who use nature as a source of inspiration. Engineers, architects, chefs, designers — the list is endless. It includes educators, too.

“All the kids need their time outside, just to decompress, recalibrate and be ready to learn,” said Nate Arnett, director of Adventure Central. “If we have two or three rain days in a row and everybody is stuck inside, we feel it — big time.”

Adventure Central (AC) is an after-school and summer program located at Wesleyan MetroPark and a partnership between Five Rivers MetroParks, The Ohio State University Extension and 4-H. Nature and time outdoors are at the core of AC’s curriculum.

“Getting the kids outside and active engages them on a whole-person level,” Arnett said. “Social time is a big piece of it, too, and we use the outdoors as a place for general connection time.”

Outside also is where a lot of learning takes place at AC. Students explore changes in nature and Wolf Creek, which runs through Wesleyan MetroPark, throughout the seasons. Time outdoors helps them learn about polymers, photosynthesis, wildlife habitats and much more.

“We show kids how to care for nature early on so when they get older, it’s not foreign to them,” said Angela Collie, AC’s program coordinator, known as Miss Peaches. “The kid who started out not liking dirt will come home covered in mud.”

Go Nuts was designed to counter the negative effects on native trees from such factors as the emerald ash borer, invasive species and climate change. Nuts and seeds collected during Go Nuts have since been grown into native tree seedlings, some planted in parks and natural areas and others given to residents who lost trees in the 2019 Memorial Day tornadoes.

“They collected seeds, tested them [for viability] and watched to see if they would germinate,” she said. “Eventually, they planted seedlings in the park. It was a fun way to teach facts and gave the kids a sense of ownership, to help them understand the importance of forests and trees. And they got to see the fruits of their labor.”

Indeed, “fun” is the name of the game at Adventure Central.

“We make everything a game,” Collie said. “Schools teach the basics, and we’re able to reinforce them through these fun, nature-based activities.”

Kids of all ages love to play in and around Wolf Creek, laying out towels on what they call “Wolf Beach,” Collie said. While there, students also play “mysteries of the creek,” studying macroinvertebrates in the creek to check water quality. They go on scavenger hunts to find insects and other indicators of habitat quality. A half-dead tree spotted during the hike to Wolf Creek becomes a murder mystery. Students solve the “Who lives here?” mystery by finding animal tracks and scat and identifing the wildlife that left them behind.

AC also encourages students to participate in hands-on outdoor activities that make them use their critical thinking skills. For example, students created a moat in AC’s outdoor rock pit and engineered a system to deliver water to it through PVC pipes, which they reconfigured several times.

“Kids come up with the greatest things with their imagination,” Collie said. “They take a stick and suddenly, they’re in the World Series.”

Students also plan and plant AC’s veggie garden, which allows them to see — and taste — the fruits of their labor.

“Watching that a-ha moment when a kid eats a tomato off the vine for the first time and realizes it doesn’t taste like one bought in the store, when a kid learns that a pickle is just a cucumber,” Collie said, “it’s amazing.”

Kids also learn cooperation, teamwork and conflict resolution at AC. “These are skills employers are saying are hard to find in people today,” Collie said, “but kids learn them just by playing outside in nature with their friends.”

In addition to its beauty, nature likely is an inspiration for so many because of its many positive effects on humans’ physical and mental health.

“When we think about holistic wellness — physical, mental, emotional and social health — the research really highlights the fact that nature, just by its design, promotes wellbeing in all those areas,” Hall said.

“There are a lot of positive things happening when we spend time in nature that we’re not even aware of that encourage our wellbeing,” Hall said. “If you know you’re going to be or are challenged with something, take a walk. Research shows if you can walk outside for 15 minutes before a test, it will triple your ability to focus and stay cognitively sharp.”

Hall also has a private counseling practice, and he tells clients one of the fundamental things they can do to improve their health is to spend just 20 minutes in a space they identify as “nature.”

“At the end of the day, we have to take care of nature,” he said. “Promoting wildlife, increasing greenspace, encouraging involvement in nature — I can’t think of a more meaningful initiative for human wellbeing than that.”