The preservation and interpretation of the Miami Valley's natural heritage is at the core of our mission. But telling the story of these special places wouldn’t be complete without weaving in the cultural history that helped shape them—from Native Americans to pioneer settlements and from agricultural development to the growth of cities and suburbs. When we protect our lands, we also protect important remnants of our journey. Your MetroParks contain a rich diversity of historical assets as unique as our parks themselves. When planning a trip to a MetroPark, add some educational aspects to your hike or bike ride by touring these historical features.

Farm life in the 1880s comes alive at Carriage Hill MetroPark. The visitor center exhibits prepare you for your journey back in time, while demonstrations, reconstructed and historical buildings and period farm animals transport you to another era.

The land where Taylorsville MetroPark now sits once was the site of the bustling town of Tadmor, one of the most important centers of transportation in early Ohio history. With all four means of transportation of the day within yards of each other, Tadmor was truly the crossroads of America.

This nationally recognized, historical estate garden is rich in plant diversity, habitats and tranquility. Many bird and butterfly species are observed here. The garden, which is also home to many bird and butterfly species, developed into the sanctuary we see today thanks to John and Marie Aull, who began creating it together after they were married in 1923. The Aull’s home, a rustic 1920s Arts and Crafts-style house, is another feature of this beautiful MetroPark.

This historic urban park has been a natural refuge for Daytonians since 1907. John H. Patterson, chairman of NCR Corp., believed that education and outdoor exercise were the pillars of good health for not only himself but for his employees. Patterson hired world famous landscape architect Frederick Law Olmsted, who designed Central Park in New York City, to design Hills & Dales.

This park features a winding, prehistoric Indian hilltop fortification named after the nearby town of Carlisle. Historians believe the Indians built Fort Carlisle between A.D. 1 and A.D. 300 to defend themselves against forces threatening their survival.

Walk through a living tunnel created by the large arching branches of old Osage orange trees. These trees were originally planted in rows in the late 1800s to serve as farm fence in the days before barbed wire was available.

Hike along this wooded trail to discover remnants of a 1930s amusement park dedicated to a World War I military unit. You will see a low, L-shaped wall that was once part of the park’s swimming pool, the remains of three street cars and a large cement square that may have been part of the dance floor.

The earthen, flood-control dams at Englewood, Germantown, Huffman and Taylorsville MetroParks were built by the Miami Conservancy District after the flood of 1913. The dam with perhaps the most colorful history is Huffman Dam, once the site of the town of Osborn. Construction of the dam began in January of 1918 and was completed in December 1921. In 1922, to make way for the Huffman Dam flood plain, the conservancy district had to move about 200 wood frame Osborn homes to higher ground. was once the town of Osborn. About 200 wood frame homes were moved to higher ground in 1922 to make way for the Miami Conservancy District’s Huffman Dam flood plain. The project also required moving rail lines, the remains of which can be seen along the Mad River at the north end of the park and from the hiking trail at the bottom of the hill at the south end.

The Dayton Inventor’s River Walk includes seven invention stations along Monument Avenue and Patterson Boulevard that celebrate some of Dayton’s most well-known inventions. And Dayton has scores more stories of innovation to tell about our region’s great innovators. Innovators such as Joe Desch, who cracked the German “Enigma” code and put the Allies on course for victory in World War II, and the great minds behind cellophane, digital watches, recycled newsprint, Freon and “Star Wars” technology.

Discover our cultural history in these MetroParks

The diversity of our cultural resources is as unique as our parks. Visit these parks for some special historical features:

View our calendar for upcoming programs featuring living history, or view historical features in the parks on your own. Park maps and interpretive signage highlight these locations. Learn more about the history of MetroParks and the lands that became them in our history section of this website.

Special events throughout the summer 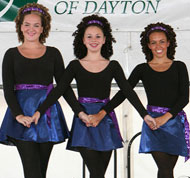 Throughout the summer, we regionally celebrate our ethnic or local heritage and culture, complete with food, music, arts and kid- and family-friendly activities. Find a complete list of our cultural and heritage events and festivals on our programs & event calendar.

Helpful links to enhance your experience