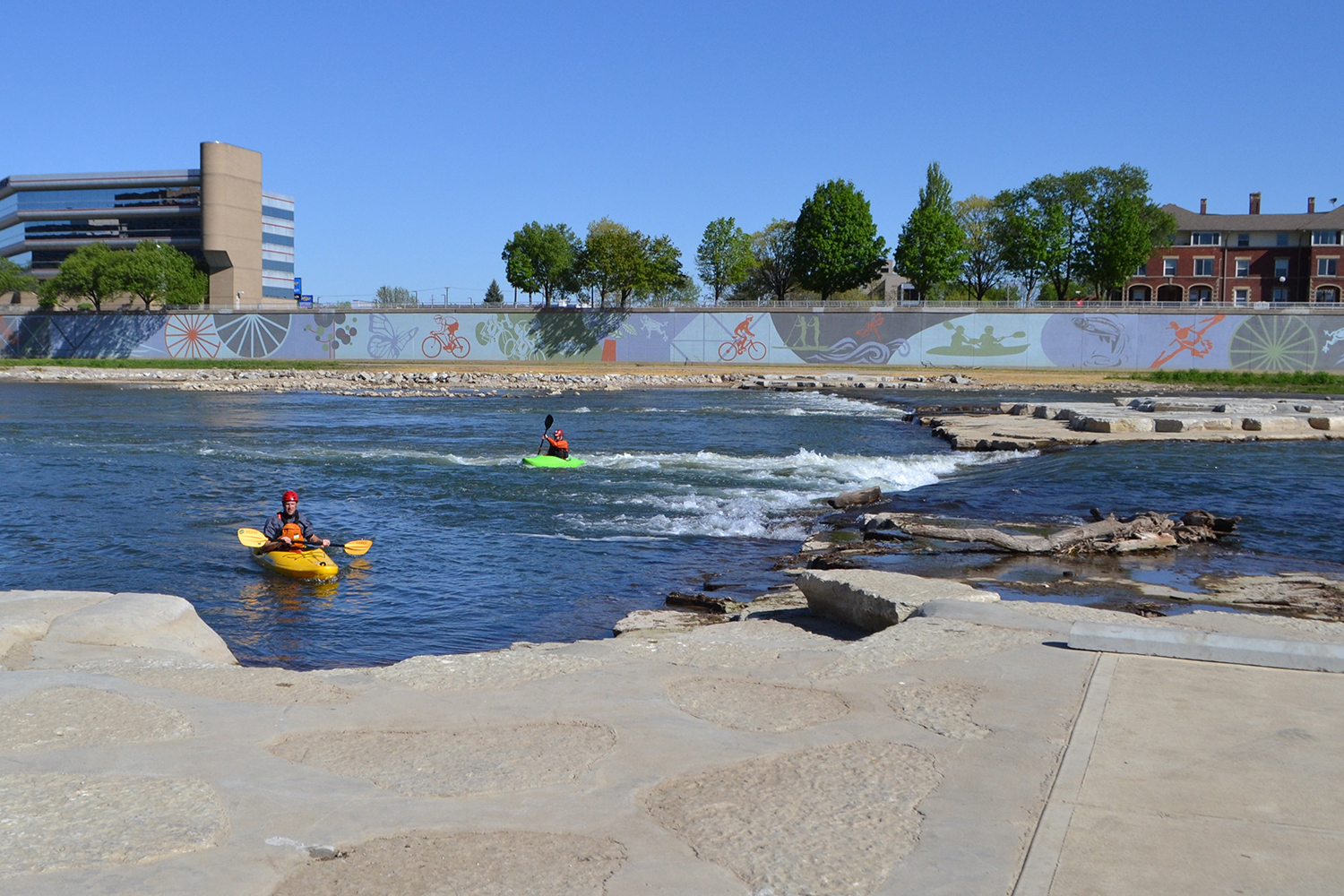 RiverScape River Run makes our downtown riverfront more accessible for the entire community. The amenity creates a long list of benefits for downtown Dayton and the region, including:

RiverScape River Run opens the downtown river to a beautiful seven-mile paddle from Eastwood MetroPark on the Mad River, through downtown to the Carillon Historical Park and University of Dayton area.

A dangerous low dam in the Great Miami River located near the Dayton Art Institute was removed and two structures that span the river have been built, each with two passageways: one smooth-water passageway for novice paddlers and one whitewater play feature for more experienced paddlers. The project also allows people to fish, sunbathe and enjoy the river downtown in new ways.

River Run also attracts experienced “play boat” kayakers who turn cartwheels, flips and rolls in the wave created by the drop. These kayakers attract numerous spectators to the shore to watch them, creating a vibrant scene along our downtown riverfront and bikeway.

Visitors using RiverScape River Run’s Feature #1 can park in one of the available public parking spaces downtown, particularly on Monument Avenue and Jefferson, St. Clair, and Harries streets. On-street, metered parking is free on weekdays after 6 PM and all day on weekends and also at the Miami Conservancy District parking lot, off Jefferson St. behind 38 E. Monument Ave., on evenings and weekends.

Parking to access Feature #2 is available evening and weekends at the west end of Monument Avenue under the I-75 bridge.

Feature #1: There are three river access points in RiverScape Metropark:

Feature #2: River access is available at either end of the Dayton View Bridge at the west end of Monument Avenue:

How do I use RiverScape River Run?

Additional information will be available at RiverScape MetroPark, including brochures and signage with specific opportunities to safely get on the river.

MetroParks will conduct surveys of the public at RiverScape and online to ask how we can help them use the River Run so that we may continue to improve opportunities.

How was RiverScape River Run funded?

The greater Dayton community raised $4 million to fund this project, identified as a high-priority project in the Greater Downtown Dayton Plan. The James M. Cox Foundation issued a $1 million challenge grant for the River Run project; plan leaders raised $3.8 million through corporate and foundation support; and the remaining funds were raised through a public campaign.

The Greater Downtown Dayton Plan is a multipronged economic development initiative and strategic blueprint for Dayton’s center city launched in May 2010. Greater Downtown is one of two regional centers of economic activity for the Dayton area, with approximately $5 billion a year in regional economic impact. A vibrant, thriving center city is crucial to the prosperity of the City of Dayton and the Dayton region. The Greater Downtown Dayton Plan calls for building on downtown’s strengths to create the type of vibrant, bustling city increasingly in demand today. RiverScape River Run is an important part of that.

Visitors should take precaution and exercise safety when planning to paddle the River Run features or at any MetroParks facility. Paddlers should observe the following safety tips:

Check out all the best places to paddle.