A New Way to Support Your Parks 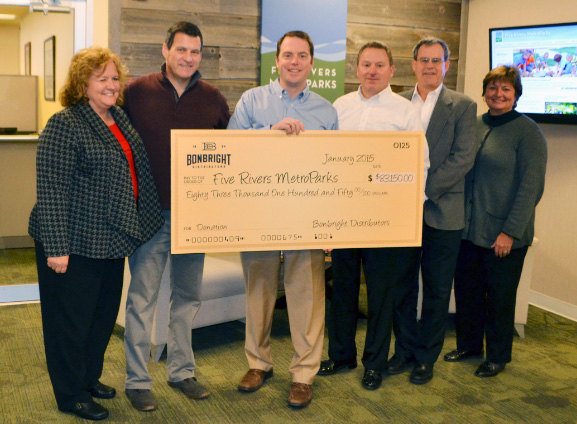 Five Rivers MetroParks has launched its own philanthropic foundation, ensuring an even healthier future for the region’s parks, forests and waterways.

The Five Rivers MetroParks Foundation creates a more strategic, structured way for donors to support the organization. Charitable contributions now can be designated for all parks or a specific park; directed to educational and recreational programs; or used for conservation, special projects and long-term support.

Bonbright Distributors made the first donation to the Five Rivers MetroParks Foundation in the amount of $15,500 (part of a larger, $83,000 gift to MetroParks). It’s the latest demonstration of the company’s long-time commitment to Five Rivers MetroParks, as the beverage distributor also has sponsored such major events as the Wagner Subaru Outdoor Experience and The Adventure Summit.

“We are thrilled with this relationship and the philanthropic generosity of Bonbright Distributors,” said Beth Redden, MetroParks’ director of development. “We appreciate how the company is giving back to Dayton’s favorite park district.”

The decision to support the new foundation was easy, said Bonbright CEO Brock Anderson III, a native Daytonian and avid cyclist who has been a MetroParks regular his entire life.

Bonbright’s backing of Five Rivers MetroParks has been made possible in part by its partnership with New Belgium Brewing Company, which Bonbright officials say has a long history of supporting outdoor lifestyles, environmental stewardship, and sustainable practices — making it a perfect fit with MetroParks’ mission.

Anderson also is contributing his time and talent to the foundation, as vice president of the volunteer board of directors. His fellow officers are Michael Brigner from Sinclair Community College, community volunteer KC Stack and Jim Gross from Dayton-Montgomery County Public Health. Other Miami Valley companies and organizations represented on the board are The Ohlmann Group, Dayton Dragons, Dayton International Airport, University of Dayton and The Siebenthaler Company.

To learn more about the Five Rivers MetroParks Foundation or make a donation, visit metroparks.org/foundation.