Celebrate spooky season with a hike through history 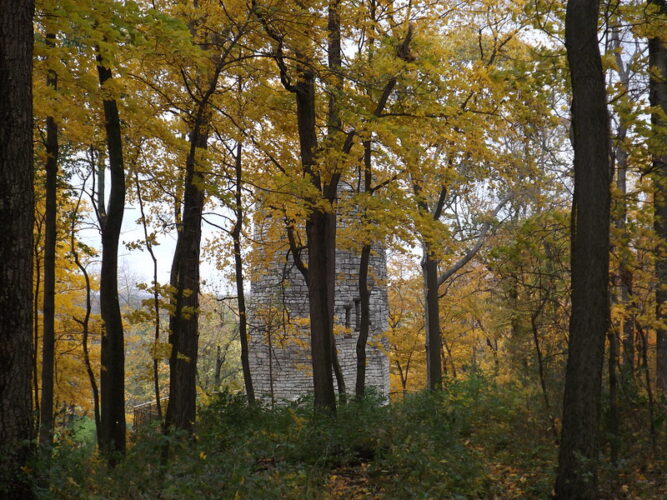 With its stunning colors and crisp temps, fall is an awesome time to get outdoorsy — and to explore the season’s spooky vibe by visiting some ghostly remnants of days long past in your Five Rivers MetroParks.

The preservation and interpretation of the Dayton region’s natural heritage is at the core of MetroParks’ mission, but telling the story of these special places wouldn’t be complete without the cultural history that helped shape them. Protecting our region’s lands also means protecting important remnants of our human journey. 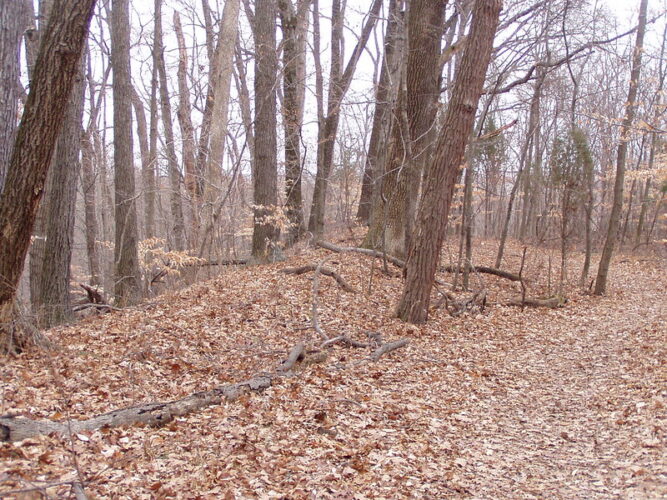 Twin Creek MetroPark: Indeed, that human history winds back thousands of years: Twin Creek MetroPark contains a pre-contact Native American hilltop mound, Carlisle Fort, built approximately 2,000 years ago. Once thought to be a fortification, archeologists now believe it was a ceremonial location for the Hopewell culture.

How to go: Find these ancient ruins in a beautiful, forested area. Park at the trailhead near the entrance at 8502 Chamberlain Road. Hike the 1.6-mile green trail and look for the Hopewell Earthwork marker. 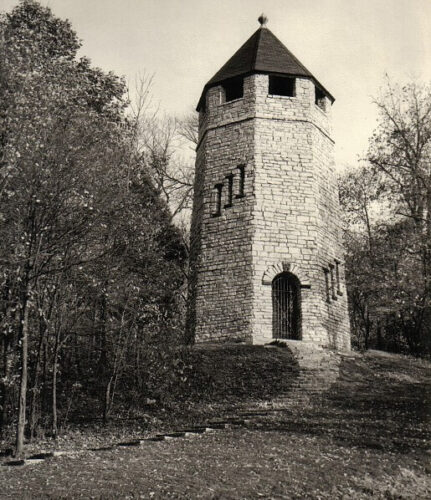 Hills & Dales MetroPark: Perhaps one of the best-known remnants of the past can be found at Hills & Dales MetroPark. Known by a number of names — including Frankenstein’s Castle, Patterson’s Castle and Lookout Tower — the turret-shaped stone tower in the park was built by the National Youth Administration and opened in approximately 1940. Its original purpose was to provide visitors a beautiful view of the Community Country Club. The structure’s original wooden roof was lost long ago and, due to safety concerns, the tower has been sealed so no one can enter, but it remains a favorite Hills & Dales landmark.

According to urban legend, the tower is haunted by a young woman who died in 1967 when lightning struck the tower while she and a companion were inside. Supposedly, shortly after the tragic death, park goers started to report seeing the burnt images of her inside staining the walls. The park repeatedly tried to paint over these images, but to no avail. This created many rumors, and the tower became a mecca for curious observers, which led it to be closed for safety and to prevent vandalism. 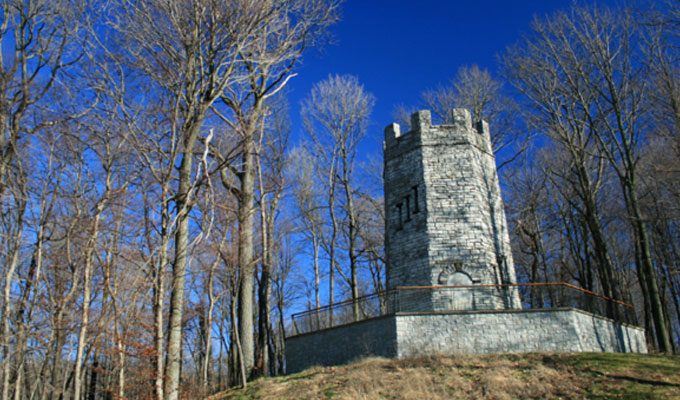 How to go: Park in the lot at 100 Deep Hollow Road and take the 1.5-mile Adirondack trail. Continue on the half-mile Inspiration Point trail and check out Old Barn Camp to imagine what life was like at the turn of the 20th century in Dayton. 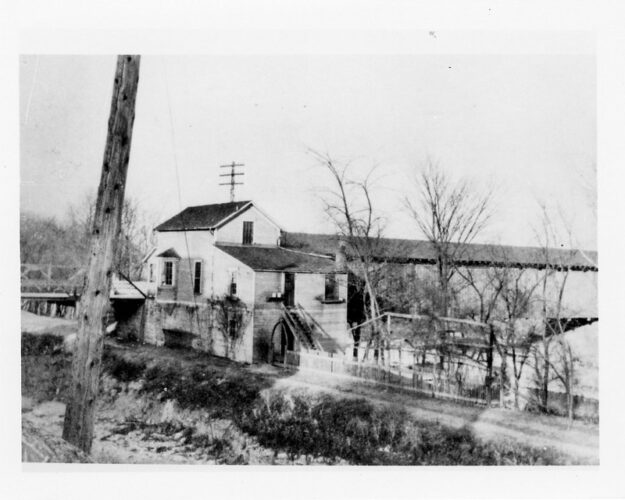 Taylorsville MetroPark: While not dogged by rumors of ghosts, another distinctive remnant of the past can be found at Taylorsville MetroPark, home to the once-bustling village of Tadmor. One of the most important centers of transportation in early Ohio history and known as the original crossroads of America, Tadmor was located on the National Road, the Miami and Erie Canal, and Dayton & Michigan Railroad line. Residents hoped Tadmor’s strategic location would help it prosper, but successive flooding on the Great Miami River stifled growth. Tadmor was finally abandoned when a dam constructed by the Miami Conservancy District in 1922 to retain water during flooding made the site uninhabitable. 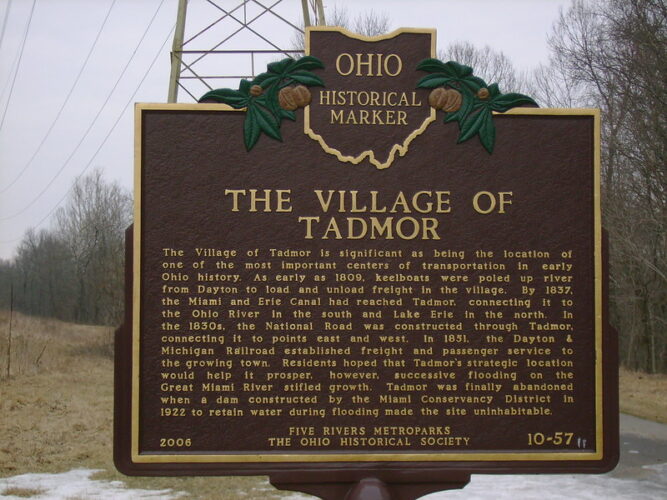 How to go: Follow the paved Great Miami River Bikeway north of the dam about 1.25 miles to the site of Tadmor. Park in the lot at the 2005 U.S. 40 entrance. Not much remains of Tadmor, so look for the historical marker to know when you’ve arrived at this ghost town. 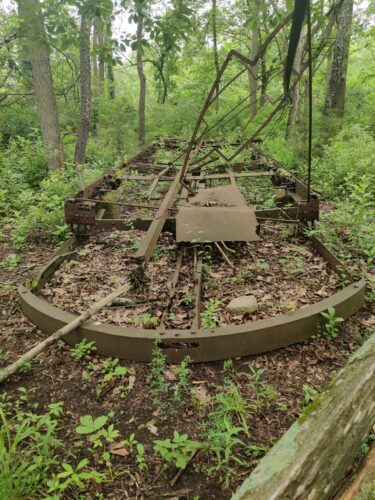 Possum Creek MetroPark: Another destination once bustling with activity can be found at Possum Creek MetroPark’s Argonne Forest. You can still see traces of this 1930s park dedicated to a World War I military unit. Find a low, L-shaped wall that once was part of the park’s swimming pool, the remnants of three street cars and a large cement square that was part of the dance floor. Argonne Forest was built to give people, most of whom were urban-dwellers at the time, a respite from the city’s crowds and congestion. 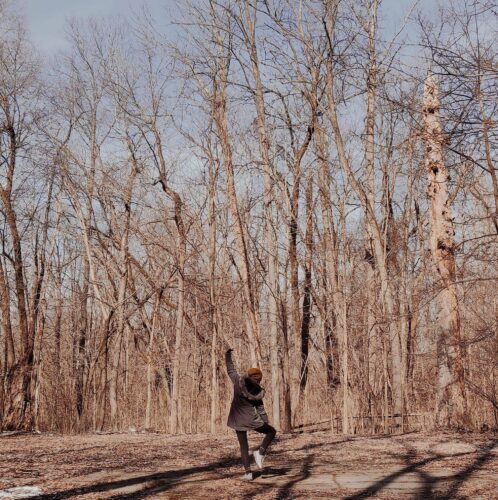 How to go: From the park’s entrance at 4790 Frytown Rd., park in the first lot and hike the 1.4-mile purple trail loop.

Other nearby and notable destinations:

Ridge Avenue Bridge: Newly constructed in 2015, the original Ridge Avenue Bridge was the site of one of Dayton’s most notorious crimes in the late 1800s. Bessie Little went to meet her beau Albert at a park close to what is now the Oregon District, but never returned to her boarding house after the fateful meeting. Walk or bike the Stillwater River Trail to visit this bridge. Learn more about the tragic story of Bessie Little from this 2014 Dayton Daily News story about the bridge’s reconstruction and history.

During the past 175 years, Woodland has become the final resting place of more than 110,000 people – including famous (and infamous) Daytonians. From great inventors to bank robbers, you can learn more about these Daytonians by taking an in-person tour or a virtual tour.

MetroParks mobile app, powered by OuterSpatial, can help you find all these points-of-interest along the trails. Download MetroParks free mobile app.